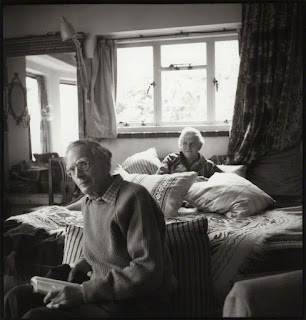 Ivon Hitchens was one of England's finest 20th Century landscape painters. Here he is at his delightfully ramshackle Sussex home with his lovely wife Mary. 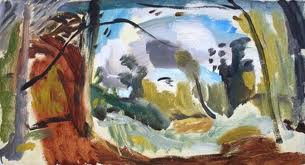 He'd invited me for tea; it must have been around 1970 ish. His house was FILLED with work, there was hardly enough space to move from one room to another. Every wall was stacked with paintings all leaning against each other, leaving just a few inches to pass between them. So very different to David Hockney's studio that I'd visited just a few days earlier; it had been noticeably empty.

Ivon's influence can still be seen almost everywhere in modern landscape painting. One only has to look at the works of Howard Hodgkin and his acolytes.

When I left his home, Mary picked a large Peony flower for me. Before I reached home it had fallen to pieces. I didn't see either Ivon or Mary again.

Ivon was a quiet, unassuming, man; an example to all painters. Since his death, his paintings now sell for around the £150,000 figure; I think that would have made him smile.