It's the little things that count (infuriate). 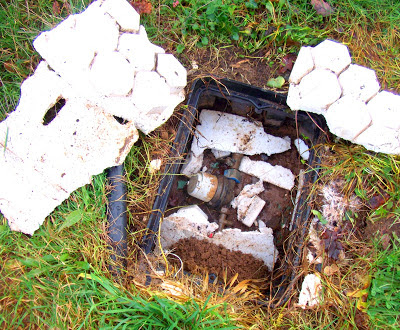 Above is the almost brand new water meter which serves our recently acquired tobacco barn; it was installed less than a year ago.

Originally it had a green plastic, and well insulated, cover; the bits of white, honey-comb like, polystyrene are all that now remain.

So how (I hear you asking) did it get to be in such a terrible state? Well, when my arrogant, half-witted, Parisian, neighbour, built his delightful ORANGE WALL last June, he not only left unbelievable amounts a detritus behind, he also buggered-up my brand new water meter. One of his workmen managed not only to smash the top, but also twist the meter itself sideways (you can probably see that it no longer points upwards, as it should).

Being of a quiet nature, I asked politely if he would replace the cover; and he agreed that he would.

But, as one might expect of a parvenu Cowboy Builder.... he has, of course, done NOTHING.

It really is the little things that infuriate; I never imagined that it was too taxing for him to replace what he openly acknowledges that he broke. I'm beginning to understand why he's so universally mistrusted and disliked.

p.s. I can hear cries from all quarters of the globe saying 'Cro, why don't you grab him by the balls, squeeze them till his eyes pop out of their sockets, and threaten to torture his wife and children until the bloody thing is replaced'.

Well, the answer is simple; I'm English, and we just don't act like that. We take our time, drink tea, and prune the roses. In fact we allow miscreants to demonstrate their ineptitude by their normal daily behaviour.

One of these years I may simply ask 'Had any luck finding that meter cover yet?' But I ain't holdin' me breath.