You avin' a larf? 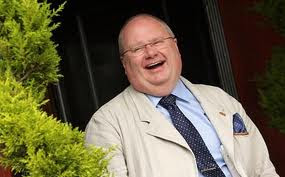 Political heavyweight, Eric Pickles (above), has recently put all Englishmen's minds at rest with his optimistic statement about England's near-future immigration numbers.

Eric, who is Secretary of State for Communities and Local Government (whatever that is), has estimated the influx of Bulgarians and Romanians (after December 31st 2013) as possibly, somewhere in the region of, roughly, approximately, round about, 300,000-ish.

Let me assure Mr Pickles that he is wrong. Just as Tony Blair totally underestimated the mass immigration influx due to his 'Open Door Policy', so has Eric underestimated the determination of the Bulgarians and Romanians to come and take everything to which (the EU insists) they will soon become entitled.

And don't forget, Eric; they will also require housing, policing, health care, and schooling for their hoards of children.

I reckon you could easily add another zero to your estimate, Eric.... just ask Tony!

And don't say I didn't warn you.