Oh What Fun They Had! 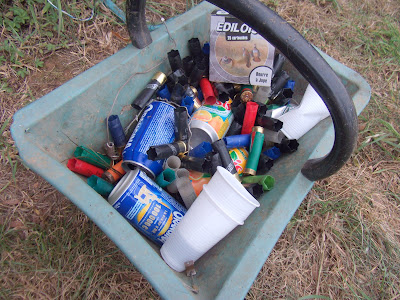 There was I, taking Monty for a Sunday afternoon walk, when what seemed like thousands of shots suddenly rang out, about 100 metres away, at my neighbour Jean-Claude's farm. Could the local 'chasse' have stumbled upon a huge troupe of wild boar, of roe deer maybe, or were they just shooting wood pigeons?

Renault Express cars (the chasseur's favourite car) were tucked into every open space, and I could see those luminous red hunters peaked caps bobbing about amongst the trees. What on earth were they doing? 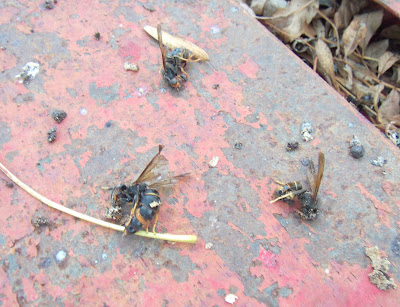 Monty wasn't keen on the continual firing of shots, so I approached just near enough to ask someone (who was going back to his car for another box of cartridges) what they were shooting. 'Frelons asiatique' (Asian hornets) he replied.

These nasty stinging hornets have become a huge problem in France over the past few years, and Jean-Claude had mentioned to a chasseur friend that there was a HUGE nest at the top of one of his trees. So, after their copious lunch, about 25 hunters made a de-tour and had great fun blasting the nest to smithereens.

I returned a little while later and found the ground littered with spent cartridges and dead insects.

I don't know if they shot anything else yesterday, but they sure bagged a good haul of hornets!