The Rich or Famous.

Brighton & Hove's celebrity spotting usually takes place along the prom' towards Hove on warm, or sunny, Sunday afternoons (Winter and Summer). One always recognises a few famous faces, but putting names to them is another matter.
When I lived in central London, celebs were everywhere, no-one rushed over with autograph books, they were left alone. It was accepted that they were simply local residents just like everyone else.
These days, of course, everyone has a phone in their hands, and 'selfies' with celebs are regarded as a 'human right'. It must be infuriating to be stopped every few metres for some geek to take a snap. 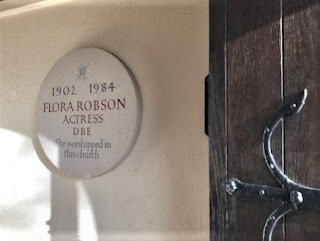 I'm not aware of any 'famous people' living nearby us these days, but Sir Roy Strong used to live just down the road, as did Dame Flora Robson; in fact they must have been neighbours. Both, I believe were regular attendees at our nearby church, where this plaque (above) is situated.
Otherwise some current famous Brighton residents include Captain Sensible, Cate Blanchett, Chris Eubank & Son, David Gilmour, David Walliams, Fat Boy Slim, Heather Mills, Julian Clary, Ken Livingston, Nick Cave, Ray Brooks, Peter André, and Robin Cousins, to name but few.
I've never met any of them, but they've never met me either!
Posted by Cro Magnon at 05:00