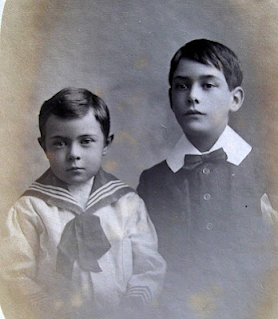 Today is my late father's birthday; he's the one on the left, with his older brother Reginald.

I find it strange that I always remember my father's birthday, but if you asked me the date of my mother's birthday I'd be grasping at straws.

He was a typical early 20th C father. Slightly distant, stiff upper lip, and traditional. We didn't have a great deal to do with each other, just the occasional "cheerio old chap" as I left for school, and maybe a "hello old chap" as I returned some months later. He never wrote to me whilst I was away.

When I first started work in The City he allowed me to use his tailor, for which I was extremely grateful. When I later received my first class hons degree he asked if it came with a piece of paper. When I said it did, he simply said "Jolly good, jolly good".

I have great respect for him. He was much loved in the community, was always extremely generous to all those who worked for him, etc. He could always be relied upon 'to do the right thing'.

So, Happy Birthday father. You would have been 117 today, and would no doubt have celebrated in much the same style as I will this evening; with a glass of good red wine. CHEERS!
Posted by Cro Magnon at 04:25