I couldn't tell you how many times I've read this book, all I knew was it was time for yet another perusal. The excessive heat of the past few weeks has meant that several old favourites have again seen the light of day.

Decline and Fall is one of the funniest books I've ever read. It follows the exploits of Paul Pennyfeather who, after being sent down from Oxford, takes a position in a rather unruly Welsh Prep' School. He becomes involved with various characters from various social classes and of various levels of honesty. 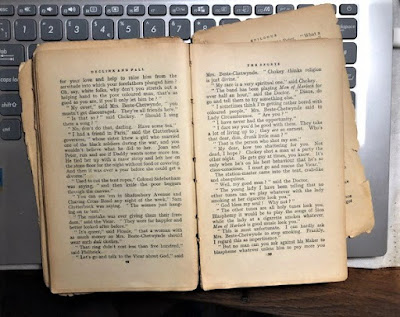 Paul falls in love with a very wealthy aristocratic lady, which leads to his downfall and imprisonment.

It must be noted that the book was written way before 'Political Correctness' was conceived, and some might be shocked by certain passages (even I am).

My 1937 copy of the Penguin paperback is falling to bits (above), which is testament to how well loved the book has been. I remember that I even had it at school with me. No doubt some time in the future I shall read it again; and laugh as much as I did a couple of days ago.