We used to play Ping Pong indoors up at the barn, but when the interior became more civilised we were kicked out, and the table remained folded-up amongst the mowers and all the building materials in the end that remained 'barn'.
Now with two grandsons in the house we have moved it outside to a shady spot in anticipation that they might play; so far it has only been us (and Billy).
Billy is totally obsessed with Ping Pong. He always puts his feet up by the net, and acts as umpire. Even when the table was no longer inside the barn he would do the same with the dining table that replaced it. 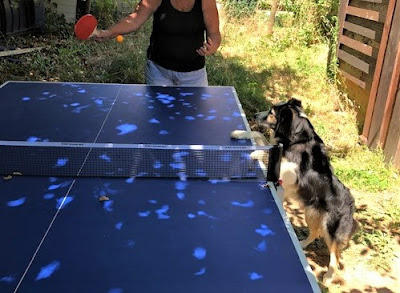 He doesn't try to bite the ball, or run off with it, he just watches and enjoys.
I'm afraid our little game didn't last too long; it was far too hot even in the shade. We returned to refresh ourselves in the pool.
Posted by Cro Magnon at 04:46