My son, Kimbo, is not known for 'cake making', but armed with his Mary Berry cake-making bible, he threw himself into the mixing bowl and created this masterpiece, below, for his son's birthday. 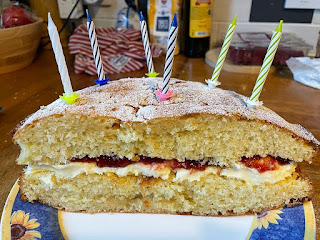 Unfortunately he only had enough materials for one layer, so it needed to be cut in half in order to make the traditional cream and jam filled two-layer cake he had set his heart upon.
Initially I'd thought that they'd already eaten half of it; but no, that's the finished job.
Apparently this did not affect it's wonderful flavour, and it was given 10/10. Well done!
Posted by Cro Magnon at 04:49