Alphonse is my doll; I've had him since I was born. I think of him as the original 'Action Man'; a forerunner of the badly coiffed plastic toys of the late 1960's. 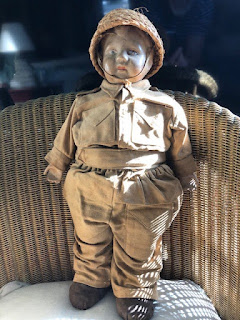 He came from London's prestigious 'Red Cross Ball' in around 1944-ish. My mother won him in a raffle, and I'm very pleased that she kept him (no doubt in case she later had a son).
Alphonse represented a Prisoner of War under the Japanese, and no doubt the money he raised was sent out in the form of aid. He wears a raffia hat, and raffia shoes. His clothing is that of an army Private. Other than that, I know nothing about him. Originally he walked with the aid of a stick which was attached to a metal band around his waist; but that wasn't my scene, and I soon abandoned it. 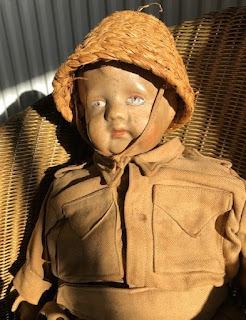 Being a typical boy, I drew all over his face; some of which won't now come off. However, he's lasted well considering how old he is, although his clothes could probably use a good washing.
Dear Alphonse is a one-off; his uniform was hand made, as were the hat and shoes. There is no other Alphonse. At present he is wearing a Poppy, and is sitting in our bay window until Remembrance Day. I think he'd approve.
We've been together for 75 years, and he hasn't changed one bit. I love him.
Posted by Cro Magnon at 05:03