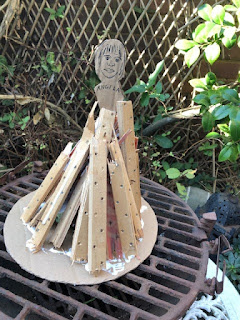 When I was a child, in my native Surrey village of Lingfield, it was the biggest event of the year; even eclipsing Christmas. At night the whole village came out, dressed in peculiar costumes, and paraded around the village with blazing torches, accompanied by groups from surrounding villages. The whole caboodle would end around a huge bonfire, burning a traditional 'Guy', that was always made by our gardener, Fuller.
On November 6th, preparations would begin for the following year's parade. 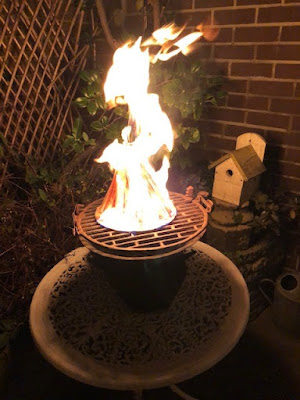 In these days of Political Correctness and elf-n-safety, fires are frowned upon, and fireworks are almost non-existent. Looking out from our front bedroom window last night I didn't see a single firework, or even hear the sound of speeding fire engines. I did hear a very feint distant sound of 'bangs' (Lewes maybe?), but nothing from Brighton. What a change from a couple of decades ago.
However, Cro is not to be thwarted. In a great rush I made a small bonfire, topped it with an unrecognisable image of Angela Rayner (a Socialist politician), and along with a couple of guests, we Oooohed and Aaaahed as it was consumed by flame.
Tradition was upheld, another of my miniature bonfires was burned, and in the ways of Sussex an unpopular figure was 'burned at the stake'.
Size isn't everything!
Posted by Cro Magnon at 02:56