There are two distinct types of 'Graffiti'. One might be better described as 'Street Art', and the other as 'Scrawl'. I am a big fan of good examples of the former, but I cannot stand the pointless 'tags' that now sully walls almost everywhere the world over.

There are some very good public paintings around us here; including Banksy's famous kissing policemen. This one below is very nearby, and is beautifully painted. 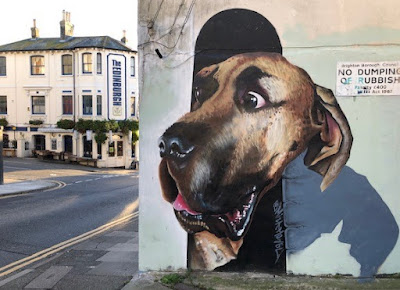 Also nearby is this perfect example of 'scrawl' (below) which is found in a back ally behind a row of shops. I presume it is designed to make an area look run-down and derelict. As soon as they are painted over, they reappear. 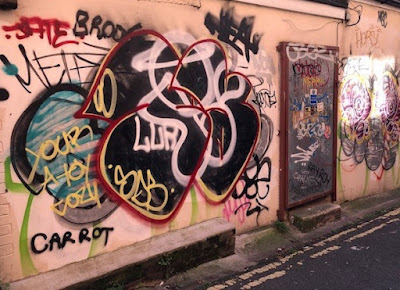 I do remember being in Aix en Provence back in the late 70's when graffiti was still in its infancy; we had gone to collect some rather special stone from a nearby quarry, and passed an hour or two walking around the town and having something to eat. Aix is a beautiful town (one of the most beautiful in Southern France) and is built from a pale honey coloured, hard, stone. I was horrified to see that some idiots had begun spraying their 'tags' over the facades of very chic shops, restaurants, etc. It was a shock, and had already begun to make the place look shabby. It was a terrible shame.

There are some superb examples of 'Street Art' around Brighton, some quite exceptional. I may show a few other at a later date; but for the moment enjoy the doggy!

p.s. The first graffiti I remember seeing was in London's Underground (The Tube) in the mid 60's. The single word 'Toots' appeared on walls all over the place. I soon learnt that this referred to 'Toots and the Maytals'; a Reggae band. Some serious fan had been at work!