Katie Price (a.k.a. Jordan) has just flown off to Las Vegas, allegedly to get married for the fourth time. The bankrupt, car-crashing, ex glamour model seems to like married life, and is having yet another go at it.

Meanwhile, I hear that Paris Hilton has also just got married, but for her it's the first time. Her new hubby is Carter Reum, a wealthy 40 year old heir to a fortune. 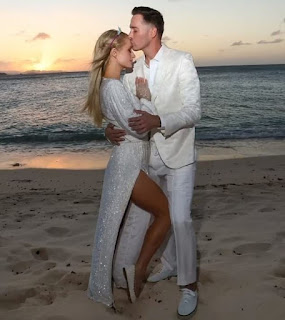 Hilton had decided that her wedding would be 'classic, tasteful, and beautiful' (I believe that Kim Kardashian was a guest). She was said to be wearing ten different dresses over the 3 days of festivities. The ceremony took place at her late grandfather's Bel Air home, and, of course; was filmed for a TV Special. We are still anxiously waiting to hear a public announcement (from The White House) of how many tens of millions it will all have cost, and how it might affect the US Public Purse.

Her beau, Mr Reum, proposed to her on the beach of a private island (above), giving her a £1.5 Million diamond ring. The happy couple dressed specially in matching white outfits for the 'surprise event', and even had time to pose for a professional photographer (probably watched by a few journalists, lawyers, armed guards, etc).

We also hear that Ms Hilton has allegedly had IVF treatment to ensure the immaculate conception, and birth, of twins in the near future (is Reum firing blanks?). This 'biblical style' event will no doubt be the subject of Part 2 of the TV Special.

How people spend their (or their father's) money is entirely up to them; I am in no position to comment or criticise!

Personally, I was married in Gibraltar. It cost about £10, and Lady Magnon and I are still talking to each other after more than 50 years.

Will either Katie Price or Paris Hilton be able to say the same? I'll bet another £10 that they won't.