If one lives in an urban UK location, Foxes are bound to be a familiar sight. They wander around taking very little notice of humans, as they scavenge for their daily meals.
Living in both urban and rural locations, I must say that the difference is staggering. Where once Foxes lived out in the woods and fields, they are now no longer to be seen. They have all moved into towns. 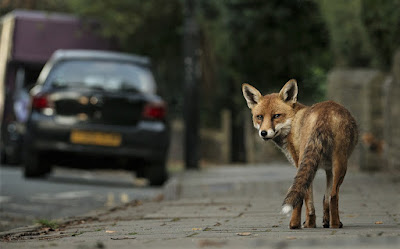 When we recently returned to the UK, the very first thing we saw when we arrived at our house was a Fox wandering about, and even inspecting the inside of our garage before heading off. He, or she, was blissfully unaware of anything unusual in its behaviour.
Since then I have seen them almost daily, and suspect that they are living under some dense bushes in front of the house. They have adapted very well to city/town life.
Foxes are very beautiful animals, but I have crossed swords with them. I once lost a whole run-full of hens (about 12) to one; in the morning I'd found every single one of my Chickens either dead or dying. The Fox had found his way in, but they couldn't find any way out; and had paid the price. Had I left them free-range in the barn, maybe I would only have lost one!
People do feed Foxes, but they aren't domestic animals. They may resemble a medium sized Dog, but that's where any similarity ends. Best to leave them be wild.
I don't dislike seeing them around, although I would prefer them to live out in the countryside. However, with Fast-Food outlets on every street corner, they know that there is an easy meal waiting for them in the form of left-overs, or spillage. And who could blame them.
Posted by Cro Magnon at 04:43