Elizabeth David tells me that Patrick Leigh Fermor's version of Moussaka was/is the world's best. I have seen film of his Greek cook preparing the infamous dish, but would never attempt to replicate her attention to detail. 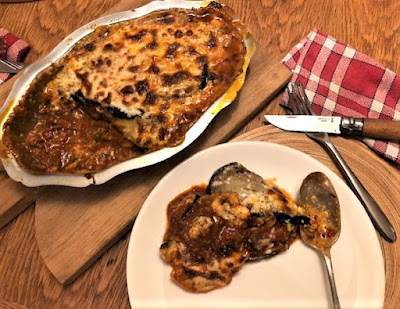 However, my amateur status did not repel me from attempting something similar. I consulted no book or expert, bought what I considered the best ingredients, and threw caution to the winds.
I quite imagine that Fermor would have found my example lacking in most departments, but for me it was a pretty good first attempt.
I used Beef instead of Lamb, but it tasted just as I remember. My main fault was that it was not 'solid' enough; too much wine with my 'bolognaise' perhaps.
Lady Magnon made no complaints, and there is a small amount left over for my breakfast.
Practice makes perfect, but I'm not really aiming for perfection.
Posted by Cro Magnon at 04:39