There is no question that our greatest concern before heading back to the UK was for Billy.
We worried about the journey (he'd never been in a car for more than 15 mins before), about how he would integrate, and even about how he would take to living in a new home. He had only previously known one way of life, one environment, one house.
His playground had been one huge open area of fields and woodland, he'd had just one 'best friend' with whom he played almost every day, and (sadly) it was also where he'd encountered a few nasty dog-haters. 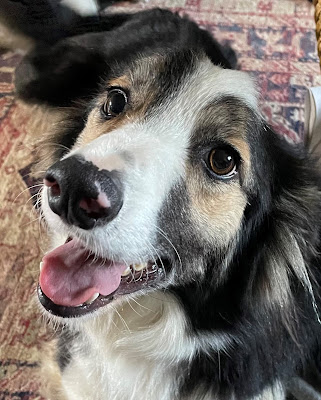 Now all that has changed. I'm pleased to say that his journey up through France, and across the Channel, went very smoothly. He was sick just once in the car, but that was nothing to what we'd expected.
We weren't there to see, but I think he slept through the entire 4 hour sea crossing. When, at last, we descended to the car deck at Newhaven, he looked bright and happy. No havoc, or chewed shoes, just a happy boy who was pleased to see us again.
Since being in his new home, he's tasted seawater, met a thousand new dogs, and experienced a totally new way of life. I think he's enjoying himself.
People keep asking me if he's a puppy; I like the fact that he looks young. I've noticed that he makes people smile, maybe Border Collies have that affect on people, or maybe they imagine he should be on a Welsh mountain herding Sheep. He also makes people want to stroke him, you wouldn't believe how many people ask if they might.
What a life!
Posted by Cro Magnon at 02:39