I used to have a friend called 'Puffin'; in fact I wrote about him back in March of last year. He was a rather solitary figure, who worked in some area of The Arts; illustrator or photographer maybe.
He lived at the top of our road opposite the church, we would bump into each other quite regularly and chat. He had a nice house, a nice wife, and nice kids. 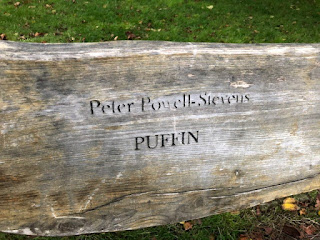 Then one day everything fell apart, and he began wandering around town looking lost and forlorn. We knew nothing of the reason for his new state of affairs, nor did we wish to. He took to alcohol, and became dishevelled and aimless. He once even asked me for £1, which I was happy to provide.
I would often see him wandering around town, presumably simply to keep moving. His ex-wife stayed in the family home, took a good new job in a well-known High Street store, and seemed to behave as if nothing had happened.
Meanwhile Puffin's other favourite activity was to ride around town on busses; he just stayed on them until they threw him off.
One day, on the No 7, he died. People thought he was asleep, so he went round and round the route until someone eventually realised what had happened.
Yes, poor old Puffin; he died on the No 7 bus, and no-one had noticed.
I came across this rustic wooden bench (above) in The Peace Park yesterday. At least someone was kind enough to remember him. I shall sit there one day, and leave some flowers. Lady Magnon saw recently that his house had been sold for nearly £1 million.
Posted by Cro Magnon at 04:55