My mother was a reasonably plain cook until she discovered Elizabeth David. Then she became more adventurous and even experimental.
Her main pre-David source of recipes was this 'Radiation Cookery Book' that came with her Gas cooker. It was a reasonably comprehensive book, with a leaning towards frugality. As you can see, it's been well used, and has just received yet another gluing and amateur 'restoration'. As with all my mother's books, etc, it comes well stocked with four-leafed-clovers; most of which are now three, or even two, leafed clovers. Time has not been kind to them.
The book is filled with small snippets of hand written recipes; as far as I can see, most of them are for 'flapjacks'. 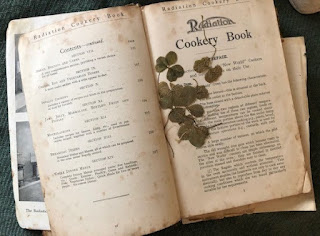 The other essential in all English kitchens is of course Mrs Beeton; the woman who changed people's culinary lives for ever.
Both books are in a terrible state, but I shall keep them as they are 'family' books. They won't be used for reference any more, but confined to the loft. 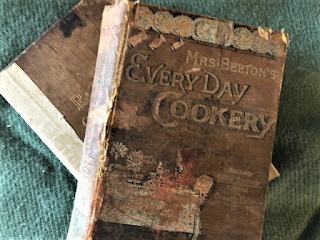