Regular readers might remember that I had been looking forward to reacquainting myself with certain English 'delicacies'.
Amongst the list were Pork Pies, vacuum packed Kippers, Battenberg Cake, Scotch eggs, and good ole British 'bangers'. 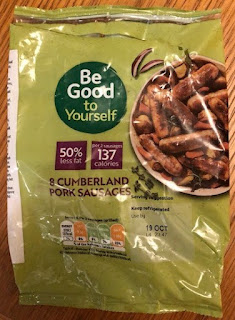 The 'bangers' came by way of Sainsbury's, and were described as Cumberland Pork Sausages. I was looking forward to them.
They were disgusting; I would hardly give them to Billy. 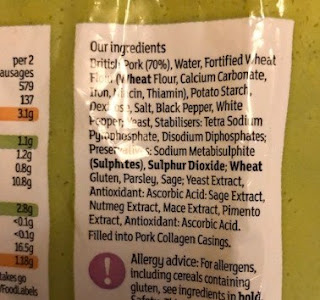 So upset was I with these bangers, that I looked-up 'Cumberland Sausage' online, and found them to be not dis-similar to the French pure Pork sausages that I'm used to in France.
As you can see above, the 'meat' content was just 70% (pureéd, not course ground), with the other 30% being made up by additives; half of which I can't even pronounce.
What's wrong with pure coarsely ground meat? Add some salt and pepper maybe, but otherwise just leave it alone! It's that bloody simple!
Posted by Cro Magnon at 13:42