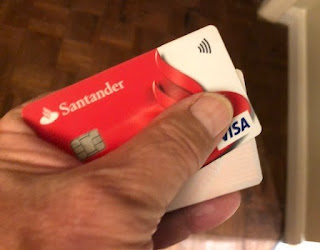 Never a dull moment.
Yesterday, whilst dog-walking, Lady Magnon found a couple of plastic cards in the churchyard; maybe it was even Billy who found them. One was a Driving Licence, the other a Santander, contactless, credit card. Both were currently valid.

My first instinct was to call the police to see if anyone had reported them either stolen or missing. I was fobbed-off by some 'clerk' who suggested that I try 'Social Media'.

The only form of 'Social Media' to which I subscribe is Facebook, so I entered the name which appeared on the Driving Licence, and up she came at once. Luckily she had an unusual name.

I sent a message, to which she instantly replied. We arranged that she would pick up her cards chez nous that afternoon. She wasn't very forthcoming about how she'd lost them, but she had cancelled the bank card. It still remains something of a mystery. Anyway, she was extremely happy to have them back.

I have only lost my wallet once. It was at Cahors railway station, and it contained not only money, but all my plastic cards and other important stuff. I was totally devastated. Two days later a 'tramp' arrived at the house with the whole lot intact. As you might imagine, I was instantly elated. I crossed his palm with silver, and thanked him profusely. He claimed to have walked the 50Kms from Cahors to return it.

p.s. Not long before the girl arrived, I was looking out from our front bay window and was shocked to see a beautiful young Fox lying down on our doorstep.