It was the second time this dog had visited us. The first time (a few months ago) he'd eventually returned home by himself; this time he was reluctant to go. 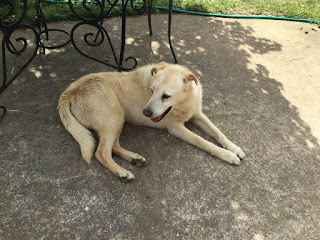 So, Lady Magnon (being a resourceful cove) put his picture on Facebook with our phone number, and waited for the phone to ring; which it did a few hours later.
Her picture of the dog had been 'shared' several times around the village, and word eventually reached the owner who came to collect him early in the evening. The dog had already bedded-down on an outdoor sofa, and had no doubt imagined that he'd found a very comfortable bed for the night.
He had come to play with Billy; and they'd had a great time. They really enjoyed themselves for a few hours, but we were very happy that his owner came to fetch him.
Nice dog. Lady M removed a few of his Ticks, then was pleased to see him go back home.
He lives about 3 miles away.
Posted by Cro Magnon at 04:22