We are in 'lovie-season' again, with the world's greatest back-slapping event happening over in the USA. Yes it's the Oscars time of year.

I opened my online paper this morning to the usual pictures of Hollywood Hopefuls all wearing strange expensive dresses, and pouting at the photographers. I am pleased to say that I didn't recognise a single one of them. 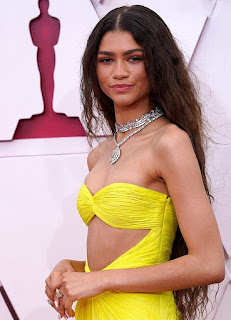 This one above is called Zendaya, and stood out because she is apparently wearing $6 Million worth of diamonds; they could have been cheap paste for all I knew.
I don't know what she does, a spot of acting maybe; but seeing a 24 year old wannabe wearing so much money around her neck (even if it was loaned for the occasion) seems rather excessive.
Having been in a few films myself, I know a bit about how this acting lark is done; and it's really no big deal. They are told what to say, how to say it, what to wear, and where to stand, etc. If they don't get it right, they are made to do it again. These people are often pretty poor at what makes them adored by their fans.
I hope the one above gets whatever it is she wants.
Posted by Cro Magnon at 07:02