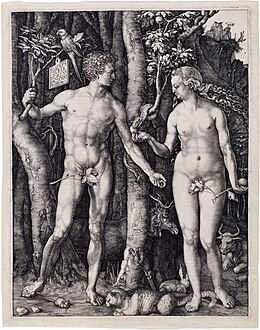 I originally posted this informative piece back in the Summer of 2019, but I have now seen fit to add to it slightly.
As all Sussex folk know, the very centre of the Garden of Eden was positioned at Chanctonbury Ring in Sussex; a high point so perfectly situated atop the South Downs that it looks out over the sea to the South, and towards Kent and Surrey to the North.

However, eventually their landlord (a Mr Good) wished to evict them, and made-up some silly story about them being members of some nudist club, and he wanted nothing more to do with them.

But he was not all bad. Mr Good took pity on them, and before closing Eden's gate behind them, he loaded onto their Ford Transit Van the minimum with which they could survive, before they could find themselves another suitable home.

He gave them a tool box, a cock and six hens, paint brushes and a tube of sepia, six pencils from 2B to 4H, tobacco in a tin, a Latin primer, a selection of verse and prose by good Sussex writers, a small printing press, the basic elements of jurisprudence, a compact medicine chest, a collection of seeds, two pigs, and a large ball of twine.
On reflection, I would now advise Mr Good, that in future, any Chanctonbury residents to be evicted should also be given a No 9 Opinel pocket knife, a box of masks, hand sanitiser, a couple of Astra Zeneca jabs, a bicycle, and some machine on which to play a good selection of instrumental Ska records.

This story is true because Mr Hilaire Belloc told me so. The rest is history.