I still occasionally (very rarely) come across someone who claims to use Vegemite for some purpose other than repairing broken water pipes.

Well let me explain something to you.

Take a look at a jar of Vege-ma-thingy, and compare it to the delightful one of MARMITE. 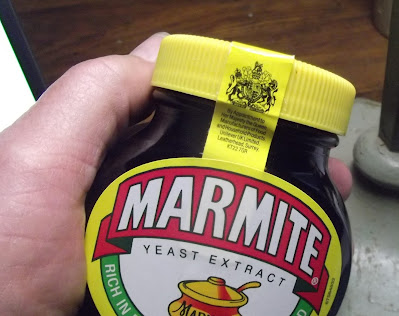 You will instantly notice one thing on the MARMITE jar; that Royal Coat of Arms on the yellow strip connecting the top with the jar. The Coat of Arms is that of Her Majesty Queen Elizabeth II, and it symbolises her approval (and use daily of) an exceptional product.

One must remember here that Her Majesty is Queen of the United Kingdom & Northern Ireland, as well as fifteen other Sovereign states; known as the 'Commonwealth Kingdoms'. She is also head of all fifty three Commonwealth States; including Australia.

Marmite is sold throughout her Kingdom, and her Coat of Arms gives confidence and pleasure to all her subjects. The other imitation product might be available in a few foreign hardware stores, and, of course, has no such approval.

I believe that some Aussies rub the brown paste (Vegemite) on their arms in order to fend off attack by 'Drop Beasts'; creatures not unlike Leprechauns.

p.s. I am not showing a photo of the Aussie product as it has no endorsements, it's an ugly jar, and it is of no interest whatsoever.