I'd just finished a pot of Peanut Butter, and was cursing their design department for the crazy shape of the jar (which makes it almost impossible to get to the last few remaining scraps which become caught inside the bulge at the bottom) when I noticed it says on the label 'The UK's Best Tasting.....'.
Not believing that any Peanut Butter could hail from the UK, I looked-up Sun-Pat on Wiki. Yes, there it was; Sun-Pat was a UK company. I had always automatically thought that is was American. 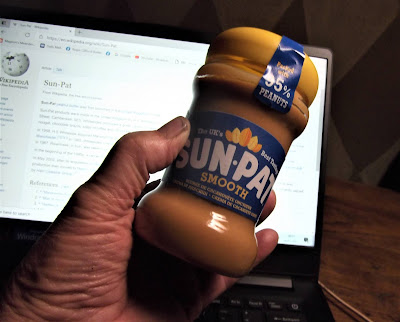 In fact since 2012 it IS now owned by an American company called 'Hain Celestial Group', who also own Frank Copper's Oxford Marmalade, and Scottish rival 'Keiller's Marmalade', as well as Linda McCartney Foods. Previously Sun-Pat was UK owned since 1946.... Nothing is sacred.
Frank Cooper's Marmalade (other than Lady M's) is probably the best Marmalade around. Much as Sun-Pat Peanut butter is also amongst the best. Hain's are obviously discerning buyers.
I find is sad that so many UK companies are now owned by foreigners. But, ever since Kit Kat was bought by Nestlé; I've stopped caring.
Posted by Cro Magnon at 05:43