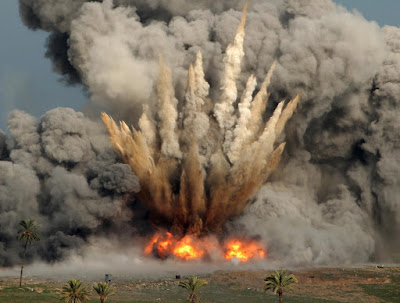 The proliferation of Reality TV shows seems to know no bounds.

Such shows reached new depths for me recently when I saw a trailer for a show called 'Celebs go Farming' (or something equally stupid). I could name others but what's the point!

So, I think the time is right to re-float my idea of  'Celebrity Bomb Disposal', which I first proposed back in October 2015.

The idea was this. Minor Celebs would compete against each other to defuse a small bomb, with one Celeb being eliminated (possibly through injury) each week. Week by week the bombs would become bigger, and the defusing more complicated. Audience members would be encouraged to shout "CUT THE RED WIRE", etc, as well as other helpful suggestions.

When down to the final two Celebs, they would then compete against each other for a prize of £100,000 (to be donated to a charity of his/her choice). To win, one of the two would need to successfully defuse the most complicated and most dangerous bomb. As you can imagine, the tension would be nail-biting, and failure to defuse correctly (see above photo) would be met with much hilarity.

I predict HUGE audience figures, and if any TV channel is interested I can nominate several annoying Celebs who I'm sure would love to take part.