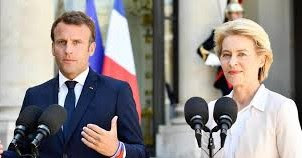 It's the subject on everyone's lips; I must say, that like most people, I've been extremely disappointed by the recent behaviour of two of the EU's grandees; Von der Leyen and Macron. Don't be fooled by their 'sweetness and light' looks, they would stab you in the back in an instant. Not nice people.

After years of negotiations between the UK and the EU, a Brexit deal was agreed and signed. What one thinks either of the deal itself, or even of Brexit in general, is of no unimportance here; it is the fact that an agreement had been made, then almost instantly rejected by Brussels.

But this has always been the case with the EU, they pass laws which the UK always abided-by, and mainland Europe ignored.

People don't forget two-faced hypocrites, and I doubt very much whether either German Von der Leyen or Frenchman Macron will be re-elected when they next go to the polls.

They must be careful. Boris is not a vindictive person, but if he decided to reciprocate it could hit both Germany and France's economies extremely hard. Wines, Cheeses, Cars, etc from France, and mostly Cars and White Goods from Germany could very soon be met with crippling border restrictions.

Wee Ms Von der Leyen might soon discover that the country she describes as 'An insignificant little island' has more effing clout than either she or a certain ex-Chancellor (who's name I won't mention) could ever have imagined!

George Eustace MP has already warned Brussels that they'll soon be 'boarding boats' if they continue to renege on certain export deals.