Right, let's try something about gardening. Maybe it will prove less controversial.

Preparing for the new year's growing season is always a pleasure. So far I've dug over just two of the four beds in readiness for some early planting/sowing. Just being out there in the sunshine, digging away, is a real pleasure.
I've decided to totally ignore the fact that we'll probably be kicked out of France before October. We'll enjoy what crops are edible prior to leaving, then allow certain neighbours to enjoy the Autumn/Winter crops that we leave behind. 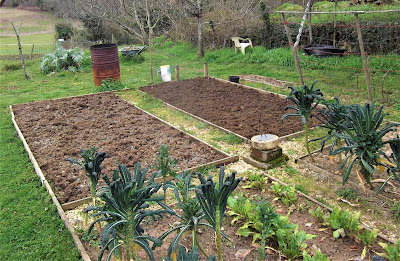 As you can probably see, we still have plenty of Cavolo Nero plants, which are now sending out beautifully tender shoots, plus some Perpetual Spinach and Swiss Chard. In the background our Globe Artichokes are looking very healthy this year.
All the usual crops will go in. Potatoes, Courgettes, Beans, Peppers, Butternuts, Aubergines, Cavolo nero, Chard, Spinach, Onions, and of course Tomatoes (which will be in pots, positioned elsewhere!).
It'll be a strange year, knowing that I'll have to leave crops unharvested. But that's how things are with post-Brexit UK/France relations.
Posted by Cro Magnon at 09:15