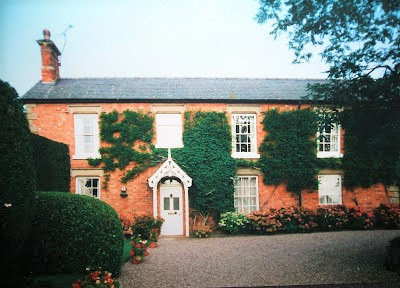 After my people sold their beautiful thatched house in West Chiltington  Sussex, they moved to this house in a small Shropshire village (above), to which they retired.
My father had left Sussex where he had spent his entire life, whilst my mother returned to her native Shropshire.
How many of us remain living where we were born? I recently saw a house-hunting programme where the husband had lived all his life in the same house; some 61 years. The programme presenter amusingly remarked "So, you're a first time buyer".
My sister moved to New Zealand in about 1964/5, my cousin moved to Canada, and I moved to France, both in 1972. My daughter lives in Oz, and at present my youngest son is living in Mexico; but we're not sure for how long; he also has homes in France, Oz, and Thailand.
The idea of staying in the same place all one's life, is now almost unheard of. We see our country, or the world, as our Oyster, and wish to explore. It's not that we are dissatisfied with life where we were born, we simply refuse to be nailed to one particular spot.
My village is very small, with just 240 well-spaced inhabitants. Old time peasant-farming has been ruined by the EU and most youngsters now quit the village to work in towns, so in future there will be very little family continuity. I wonder when the next 'return to the country' trend will arrive?
Maybe if France was to leave the EU, farming could make a come-back. Until then land remains unused, the owners receive payments from Brussels for doing nothing, and their sons and daughters head for the crowded cities.
Posted by Cro Magnon at 04:21