The scene I thought I'd never see! 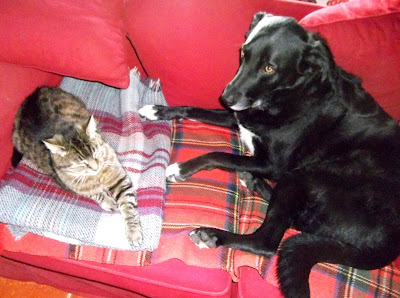 It always used to worry me that Freddie was wary of the dogs, so about 6 years ago I started to train him!

At first I used to hold him so that Monty could lick his face. Monty being so big and strong, he used to almost take his face off, but I think Freddie actually liked it.

Then I used to hold him very close to the dogs so that he could see that they meant him no harm, and over the past year or so he's begun to be fine with Bok; even going as far as touching noses.

However, you can imagine my shock yesterday morning when I came downstairs to find the above scene (it was actually still quite dark).

I rushed to grab my camera, and was able to capture the moment.

I've always dreamt of the boys curling up together at night to keep each other warm, I think it's now one tiny step closer.