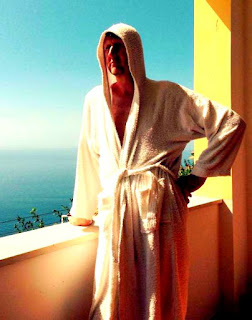 "The sun is much too sultry, one must avoid its ultry-violet rays" NC.

My oldest boy, Kimbo, starts a new job next week.

I'm not going to over-beat his drum, but he's always been an exemplary person/son.

After school he went off on the classic 'gap year' trip which lasted about two years. He worked his way around the world (without ever phoning home for money), and eventually returned to Blighty saying that he had decided what career path he wished to follow; he wanted to be an Hotel Manager. Frankly we were shocked!

Anyway, off he went to Oxford and got himself a degree in some sort of International Management thingy, and ended up managing a huge American hotel.

He's moved on since then and has been managing hundreds of unruly students at a brand new Halls of Residence, linked to a big Midlands University.

However, I think he's now found his true role in life, and has recently been 'head-hunted'; from next week he'll be working in central London as an 'executive' (I hate that word). His new job title includes the words 'Asset, Management, and Europe'; but that's all I know. I believe he'll be doing a lot of travelling, as well as a lot of delegation. It sounds perfect for him, and his new promotion is well deserved.

So, all the best darling, and don't forget your poor old Papa. One or two meagre Fray Bentos pies each dark, bitter, and lonely winter would be most welcome.