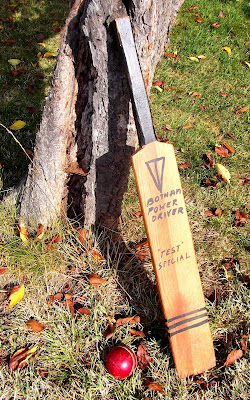 I'm a great believer in NOT buying expensive gifts for children, especially when they stamp their feet as they demand them.

I was reading a 'social worker's' report recently about delivering presents to 'needy' children last Christmas. She claimed there was never any shortage of hi-tech games, fags, bottles of Vodka, or giant TV sets in their chaotic homes, and the kindly offered simple gifts were mostly thrown onto a pile in a corner.

The above Cricket bat is a good example of my attitude. When my oldest showed interest in playing the game (aged about 8), I took a lump of wood and made a bat for him. The words Botham Power Driver, Test Special, and Boundary Searcher (on the back), were added for authenticity! All these years later we still use the bat, which has become something of an institution. (N.B. He nows plays for his town's club, and has had a series of very expensive bats)

When my youngest was also about 8 he wanted computer games. Instead I bought him a pretty basic computer (Amstrad) and encouraged him to design and create his own games, which he did very successfully. He actually preferred the act of creating the games to playing them; a good lesson was learned. (N.B. His work is now computer based)

I rather despair at all the technology bestowed upon children. A bat ball and tree stump, a skipping rope, or an old bike, are far better presents for children. I'm sure they give them not only more fun, but also an increased sense of values. This isn't frugality, as some might imagine, but a way of getting children to use their imaginations; which can only be a GOOD thing.

Somehow I suspect that things could go very wrong for post-millennials if we're not careful.