Growing older (me and them). 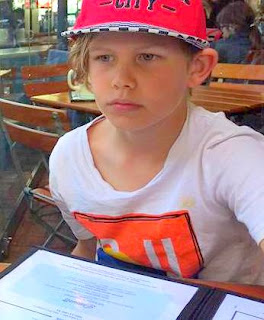 My only regret about growing older, is the prospect of not knowing what will become of my six grandsons.

Those of us who are lucky enough to have grandchildren usually study their development from Day 1. We keep a discreet eye on them, and our fingers are permanently crossed for their futures.

I'm not one to hope for great things, I would rather see a natural talent developed, than expect them to shine academically. We've already had one genius in our family in the past 70 years (sadly, not me), so I'm not expecting another one too soon.

I've always imagined the one above (Finn) as a future actor. I have no idea if he has any plans for his eventual career, but I would like to see him in at least one school play (if they have such things in Oz), just to see how he reacts. I have a feeling he'd like it; he has a natural theatrical flair.

The others are just being the scampish boys that they are (and should be); none of them shows any particular leaning, other than one who is a gifted Cricketer.

Career choices for the future will take a lot of careful thought. The most important thing is that they gain satisfaction from their eventual occupations (and hopefully earn a decent crust).