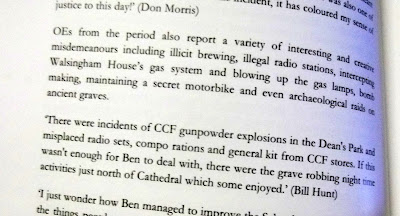 In a recent book written about my specific era up at school, these two paragraphs brought back wonderful memories. The (Bill Hunt) mentioned in para 2 was my partner in crime.

Yes, we brewed beer, we certainly ran a radio station, and the making (and igniting) of small bombs was a particular pleasure.

I remember one particular bomb that we designed to separate a smallish tree from its mooring (which it eventually did very efficiently). We dug around the roots, placed the device inside the hole, laid about two yards of 'Jetex' fuse, lit it, ran like bloody hell, and hid behind a large tree. The noise was deafening (we were informed later that it could be heard over 5 miles away). Our return to school was by way of a highly meandering woodland route, in order to avoid any over-zealous nosy policemen.

The grave robbing was conducted by a friend. The Cathedral authorities had decided to make their rather bedraggled graveyard into a modern 'Garden of Peace'. All the ancient headstones were moved to against the Cathedral's walls, and the ground was ploughed rotovated and levelled before being re-sowed. During this work all sorts of bits and pieces came to the surface, and my friend went out each night with his torch to see what had appeared. His collection was impressive, and rather ghoulish; not my cup of tea at all.

There was not only a 'secret motorbike' at school, but also several secret cars. Another of my good friends ('G' was later sacked) owned a Morgan 3 wheeler, and an Austin Healey 100/6, which he kept in a secretive distant car park. I would occasionally take the Austin Healey for a drive; a fabulous car. This was probably my most reckless activity; thank goodness I was never caught.

Some of these 'hobbies' might sound a tad irresponsible, but what else would you expect from several hundred boys in their teens?