Some corner of a foreign vegetable garden. 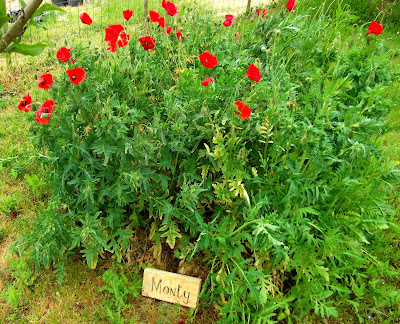 Last year I sowed a selection of wild flowers on Monty's grave at Haddock's. This year there's been plenty of vigorous growth, but only Poppies have appeared. Goodness knows what happened to all the other varieties.

I'm writing this because I've recently noticed what I imagine is a new pet cemetery quite near to us. It is a small walled area on a rocky hillside on the edge of a tiny medieval village, with two small graves, not unlike Monty's (see below). I quite expect some child insisted its father made a special cemetery for Tiddles, or Rover. 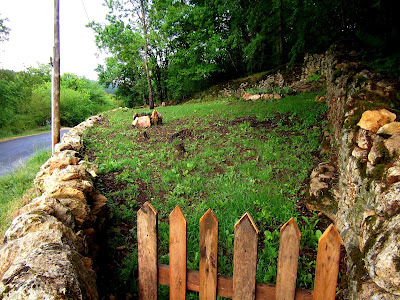 Monty's, and the two graves above (you'd have to enlarge the photo), are reminiscent of the Late Bronze to Late Iron age 'cists' that are the simplest form of graves; a plain circle of stones covering an actual burial pit.

As long as we remember our poor old departed companions; that's all that matters. I don't think Monty would have wanted a fancy mausoleum.