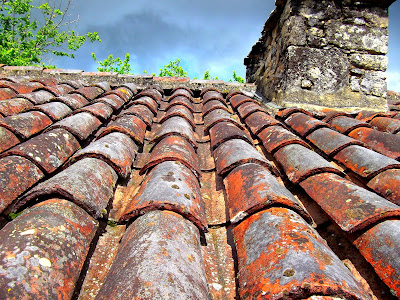 Our house is covered with old hand-made wonky Roman (or canal) tiles.

We had the roof re-done a few years back, using modern interlocking tiles for the underneath, and the old tiles back on top. The roof looks no different now from when it was first built 300 years ago. It wouldn't surprise me if most of the old tiles date from that time too.

The only real problem with Roman tiles is that they can slip. They aren't nailed or hooked onto anything; they just sit there hoping for the best. However, wind and rain does occasionally make them move down-hill and they need to be pushed up again with a long stick. I check mine just once a year, and the whole process of re-positioning takes about 10 minutes. Failure to do this makes it look as if one's roof is about to collapse (and in many cases it probably is).

My once a year time came a couple of days ago, and whilst pushing one or two back into place (usually right up at the ridge) I came across one that was completely broken. This isn't a major problem, as one simply removes the broken one and pushes another into place. No nails to remove; you just swap one for another.

Such roofs need to be of less than a certain angle; a 45 degree, or more, roof would have them sliding off to music. I'm not sure, but I would estimate a roof angle of about 30 degrees would be the maximum for these tiles.

They may not be the most efficient roof tiles, but they look 'right' on an old house. Nothing looks worse than inappropriate tiles on an old building. They shock; I could show you some horrors!