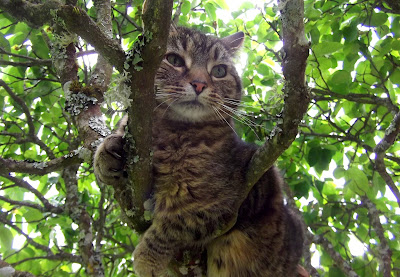 Fred relaxing in the Quince tree.

For the past 6 years I've been 'training' Freddie to tolerate dogs. I started by holding him whilst Monty licked the bejeezus out of him; he wasn't all that keen.

Since then I've slowly encouraged him to be as near as possible to the dogs, and now that we only have Bok, I've tried to show him that he means him no harm. It's taken a long time, but they're now on nose touching terms, although Fred is still a little wary of him.

These days I often find them lying side by side out in the sunshine; they ignore each other.

He's quite a nice cat. His main fault is wanting to come indoors, then go outdoors, then in again, then out again, throughout the day. He has two cat-flaps, but prefers to make me run about opening and closing doors for him all day long (which I do).

He's a brown Tabby, and was actually BOUGHT by my oldest son for British legal tender money (a very rare thing for a cat).

Happy birthday Fred, you old misery. I love you really, and there will be a birthday treat for you at lunchtime.