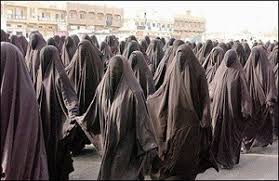 The Burka isn't to all tastes, even within Islam.

Other than the rather downtrodden and enslaved appearance of Burka clad women, there are other problems which are often overlooked; one of which I has only recently come to my attention.

There is considerably less sunlight in Europe compared to the Middle East, and this is causing European Burka wearers to become deficient in Vitamin D.

The result has been a huge rise of 'Rickets' in children born to women who cover themselves from head to foot in black.

I don't suppose they'll change their cultural habits, but maybe they should have sunbeds in private rooms somewhere, or take vitamin supplement pills. We'd all thought that Rickets had died out with the dark ages; it seems not, apparently it's being revived by the Burka.