Where our (your) money goes. 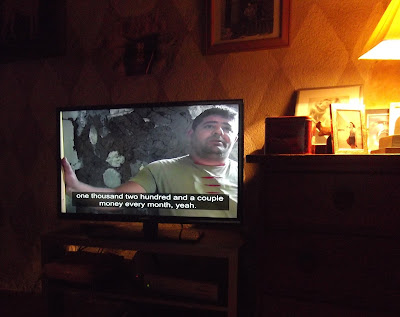 Above is a still from 'Benefits Britain; life on the dole'. I missed this TV series first time round (thankfully), but watched a bit of a re-run last night. What I saw was quite disturbing.

It's a sad state of affairs that Britain's welfare system is abused as much as it is. We all know that it happens, but no-one seems prepared to do much about it. One can now go on TV and brag about how much money you can con out of the government, and even what you spend it on.

Take the man above as an example. His name I believe is 'John'; he is Romanian and claimed to be receiving £20,000 in benefits (which he was hoping to increase). The programme showed him back in Romania, drawing out his benefit money from an ATM, and spending it doing-up his home. He was employing several builders, and was seen handing out cash like sweet wrappers.

He was installing a new bathroom, new windows, and even cladding the exterior with what looked like large marble slabs; all at the expense of the British tax payer.

PM David Cameron has recently been trying to stop the practice of UK benefits claimants having child allowances sent back to their country of origin, but maybe he should look into the foreign property restoration racket first. People like 'John' are making the UK look like one big pathetic Cash Cow.

So, if you're Romanian (or just about any other nationality), and you need some work doing on your home, pop over to the UK, join the benefits Gravy Train, and send the money back home. That new bathroom you've been after for years could soon be yours!