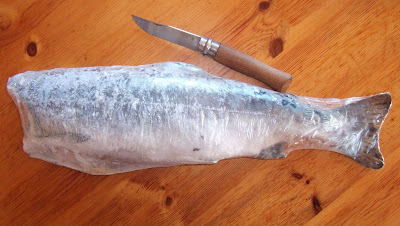 I like Salmon, and I often buy these frozen whole fish when they appear at my local supermarket (Leclerc).

This one above, bought yesterday, without the guts and head weighed just over one kilo, and cost €4.27  (£3), whereas a whole fresh fish of the same size would be at least €20.

OK, it's not fresh Salmon, but it's very reasonably priced and its flavour is very good. The only really noticeable difference is in its texture when cooked; which is somewhat firmer than if fresh.

I saw them in half, then later fillet each half making enough for the two of us. In all this makes four good meals. I'm a bit conservative when it comes to cooking fish, and the 'steaks' are usually fried in olive oil/butter, and served with a hollandaise sauce (and possibly some chips).

Every year I make a resolution to eat more fish (mostly because I like it), but end up buying the same old Salmon, fish fingers, Mussels and Whelks. I really MUST become more piscatorialy adventurous.