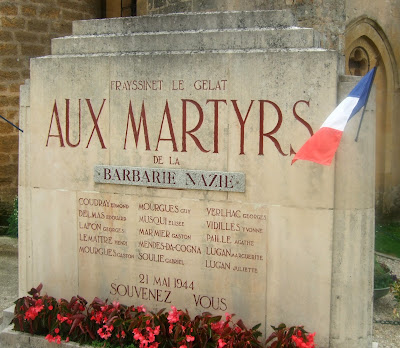 It's Remembrance Day, and as with most other European cities towns and villages, remembrance ceremonies are held here around a central monument.

One of the more poignant of our local monuments is the one above in our tiny nearby village of Frayssinet le Gelat; the village where I go on Sundays to buy my bread.

The monument chronicles the deaths of 15 villagers on the 21st of May 1944. An SS officer had been shot by the French resistance, and in retaliation the Germans took hostages; 10 young men and 5 young women, all from single child families.

All 15 were then shot; the punishment being that the families' lines of descent would come to an end.

You might notice that the words Barbarie Nazie are written on a separate piece of blueish stone, screwed onto the monument. Underneath, it originally said Barbarie Allemande but in the name of International rapprochement the wording has recently been changed (diplomatically).

As you can see, the 15 martyrs are not forgotten.