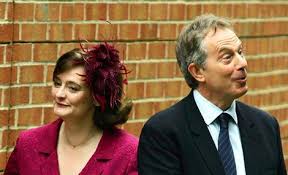 When making a point in blog-land, one risks the wrath of the left, the right, atheists, Christians, or any others who hold rigid beliefs. But what the fuck; occasionally one has to tell it how it is, and today I am still very very angry, saddened, and frustrated. So much so that I haven't previously been able to express my thoughts about the recent events in Paris.

Forget Tony's New effing Labour, how about Tony's New Bellicosity? Since leaving party politics in 2007, Fettes and Oxford 'toff' Tony Blair has left the world in an extremely dangerous state; whilst in the meantime, lining his own pockets extremely efficiently to an estimation of about £100 million.

Tony will always be remembered for these 4 things.

1. He opened the floodgates for uncontrolled UK immigration.

2. When people started to ask difficult questions, he quit his Prime Ministerial post and dropped poor inept Brown into the shit (having shredded all his own official papers)

3. Some joker made him a Middle Eastern 'peace envoy' (if that doesn't make you laugh, I don't know what bloody would)

4. He (along with his chum Bush) began what will more than likely end in another quasi World War.

What an amazing legacy for just one Labour PM!

The knock-on effects of the Bush/Blair Iraq war can now be seen almost everywhere; the most recent example having just been witnessed in Paris.

Fanaticism is everywhere; hardly any 'democratic country' is unaffected, whether it be by a few individuals hidden amongst the floods of nameless immigrants, or their final acts of terrorism. Comfortable European (and other) residents are running off to fight for ISIS by the score (already an estimated 800 from the UK, and 2000 from France), then many returning as hardened Jihadis to continue their atrocities in the countries that generously gave them (or their parents) refuge.

In Germany where Matron Merkel had invited an unlimited amount of immigrants into 'her' country, there has been an appalling rise in far right anti-Muslim vigilante groups; sadly I can only see this getting worse. In France I read that Marine Le Pen's nasty NF party are busy planning equally unpleasant reprisals.

Well-meaning liberals are still inviting unlimited amounts of anonymous immigrants into our midst, whether this be in Europe, Australia, or the US. So let me repeat what I've said before; 'Be very, very, wary of what you wish for''. We have no idea who these people are, or what are their intentions. Most are genuine refugees, but hidden amongst them are people with very different agendas.

Blair certainly has to take a hefty responsibility for what is happening. That initial trumped-up claim about non-existent WMD's has resulted in between 500,000 and a million deaths in Iraq alone since 2003. I hate to imagine how many others have lost their lives in Syria, Libya, Pakistan, Afghanistan, etc. The bloodshed has been horrific.

A lot of people voted for Blair and supported his Middle Eastern aggression; I am very proud to say that I was NOT amongst them.

The Chilcot inquiry into the Iraq war will eventually be published in July 2016, after which I shall expect Blair to be prosecuted for war crimes at The Hague. If not; there's no bloody justice in this world.