We live in crazy times. 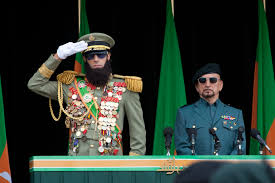 In the USA they've got tyrannical Trump, in the UK they've got comical Corbyn, in North Korea they have fat boy Kim Jong-Un, the Russians have Putin, the Syrians have Assad, and Zimbabwee-wee has Mugabe. I could go on, but I expect you get my drift. There are weird and dangerous people everywhere, and they all have one thing in common; they wish to dictate how we all should live.

On the understanding that prospective political leaders are all either megalomaniacs or just plain despots, isn't it about time that the world abandoned individual 'leaders' as such, and gave back the power to collective citizenship?

In this age of computers it would be very simple to have a small non-partisan committee who formulated important political and social questions; these could be posted on the net once a month, and the citizens would simply need to vote yes or no. Voting would take no more than a few minutes per month; and should even be made obligatory. Here is an example of the type of question that could be asked.

With the touch of a button, the people could then decide.