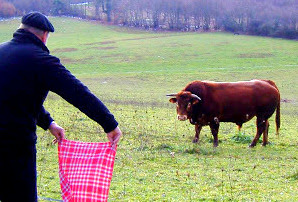 This picture (which was originally posted in December of 2010) shows El Cro winter training for the 2011 Bull Fighting season.

The bull in question probably only weighed as much as a London Bus at the time; now he weighs at least as much as two.

His temper hasn't improved with age, and I wouldn't now be quite as foolhardy.

If I was to find him outside our kitchen door these days, I'd run for the bloody hills; not that we have any hills!