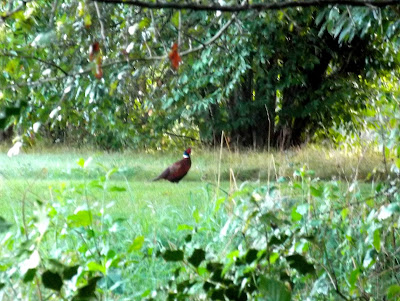 Finding a Pheasant in one's garden would normally be a pleasure, but for me it's a worry.

Here in France there are no 'wild' Pheasants as such, like there are in England; they are all bred and released for shooting.

The problem is that they are almost tame (the one above hardly moved as I took his picture), and French chasseurs are not against shooting a bird on the ground. In England there are only a few 'cast iron' rules about shooting; one is that to shoot a pheasant 'not in flight' is simply not done; it's almost a hanging offence.

So, yes it was lovely to see this beautiful cock Pheasant in the garden, but I fear for his safety. This weekend will probably be his last.

Later: Bok has just shown me a female sitting on a nest in a hedge. No doubt his 'wife'.