Can you keep a secret? So can I. 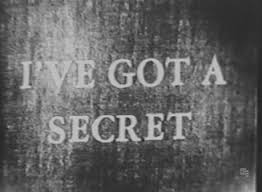 Back in September of 2010 I wrote a piece about how very few 'compliments' I'd received in my life, but recently (having just seen a certain man's photo) I realised that I'd omitted probably the most important one of all.

In my original posting I recalled someone having said that I had nice hands, and also that I'd been awarded a First Class Hons degree, but that was it. I couldn't remember a single other compliment.

I met DG back in about 1969. He was one of the most pleasant men you could ever hope to encounter. We later taught in the same well known school (I temporarily replaced someone for a year) before I left to settle in France.

I'm not going to divulge what his compliment was, because it would be inappropriate on many levels; but it was something I've never forgotten, and in its way was probably my greatest ever compliment.

This may seem like a very odd enigmatic and secretive posting; but I'm afraid it has to be that way. In fact I don't even know why I've written this; other than in DG's memory.

If anyone is really that interested; Email me. You don't know my Email address? Tough!