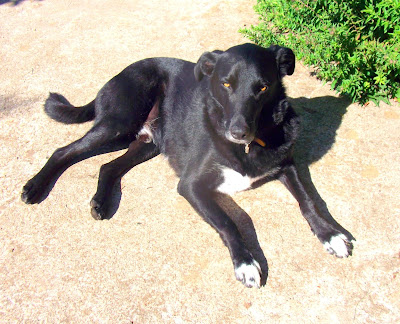 If I had a magic wand, I would wave it over Bok (above), and have him speak English for a whole day.

I would be fascinated to hear what he thinks of his world, and the part he plays in it.

I would also like to know what he thinks of Freddie, our cat; that's been puzzling me for years.

I'd like to know his opinions about the food I give him, the walks we take, and even the bed he sleeps on (usually my sofa).

I want to know what season he prefers; although I think I know this already. I want to know if he has any real dislikes. I'd also like to know why he has this in-built desire to organise other animals into herds.

He could tell me about dog linguistics; if all dogs speak the same basic language. I'd like him to tell me if there is some natural caste system between different species of dogs... i.e. if an Afghan Hound is socially superior to a Terrier Allsorts.

I'd also like to know what memories he has of his old chum Monty, and if he misses him.

Most of all though, I want to know if he loves me as much as I love him.