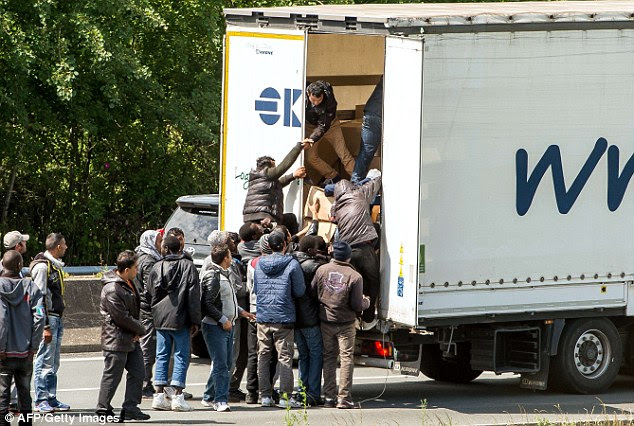 Most people will be aware of what is happening at Calais; it has become the European equivalent of the Mexico/US border. I have actually witnessed something similar to the above myself.

I was waiting in line to take the ferry from Calais to Dover when a couple of gendarmes started poking long metal poles into a huge lorry right in front of me; they were trying to detect carbon dioxide.

Almost at once people were jumping out and running off; one jumped from quite high up, and I think he broke his leg. He had to be taken away on a stretcher.

At the time I didn't really know what was happening, then after a word with the lorry driver it all became clear. He told me that it was a daily event.

In those days they were all white; probably from Romania or Bulgaria. Nowadays they are mostly from Africa.

What a bloody mess; many of these people are genuinely escaping persecution and possible death, but the majority are just there for the generous UK handouts. Unfortunately they all become tarred with the same brush, and all are viewed with suspicion.

France doesn't want them, England doesn't really want them, Italy is moaning because no-one will take them, and the EU says that the UK mustn't moan about them all wanting to get into England.

So what's the solution? Well sadly there isn't one. I quite expect that some bright-spark in France or Italy will eventually realise that if they give them all visas, they would then have the RIGHT OF ABODE in the UK, and their own problems would be over. A simple £10 ferry ticket would then take them 'legally' to their promised land, and they'd all be given whatever they want. Until that time the arguments continue.