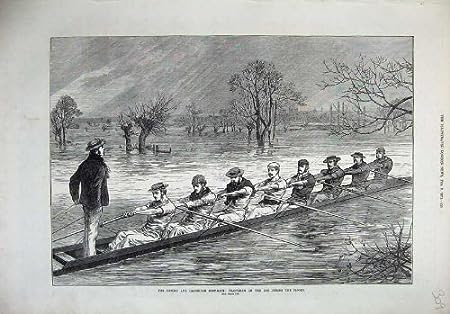 I no longer play any type of 'sport', but in my day I considered it essential.

In Winter I played Rugby, and in the Summer; Cricket and Rowing. I am of course talking about my school days (other than Rugby which I briefly played later at club level).

I was pretty hopeless at all running and jumping sports, but played a reasonable game of Fives. My Tennis was erratic, and my Golf totally hopeless. Without question my two favourite sports were Rugby and Rowing; especially the Rowing.

Rowing 8's is an interesting pastime. Your feet are strapped onto a footplate, you slide back and forth on a tiny uncomfortable wheeled seat, and you can't see where you're going; only where you've been. Whilst putting all your effort into making the wretched thing go as fast as possible, your safety is in the hands of some small spotty person who shouts at you incessantly (Coxes don't usually stand up, as in the illustration).

One of my enduring memories of rowing was coming across groups of six-fingered Fenland fishermen who'd shout obscenities at us as we snagged their lines with our oars. Our response in perfect nine man unison was always a stentorian.... "Fuck off". It still makes me laugh when I think about it.

As far as competitions are concerned I rowed at Henley, on The Serpentine, and at The Cambridge Bumps; always unsuccessfully. The Cambridge University 2nd crew (Goldie) kept a boat in our boathouse, and used our stretch of the river in preference to their own. We often practiced 'starts' together, and they always pulled away from us with frustrating ease.

Rugby is a fool's game. Other than trying to score a few points, it's basically an excuse for one big PUNCH UP. I loved it, but usually ended up as the loser; which is why my city bosses suggested I stopped.

Nowadays I play Croquet and Petanque. Relaxed, sociable, and unhurried, they are games that can be accompanied by a pleasant glass or two of Pastis. They have neither a time limit, nor officious interfering referees. Rules are mostly ignored, but there is more laughter than fisticuffs.

I suppose I might once have been called 'sporty'..... but not now.