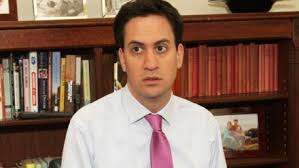 Poor old Red Ed's having a rough time of it. Some of his acolytes seem to think he's not fit for the job.

In reality, it's not the leader of the party who's at fault; it's the barmy brigade of celebrity hangers-on who do the damage. I suppose the best current example of such folk is uber-loony Russell Brand.

I now hear that the son of an old friend of mine could be next in line for the Labour leadership. The Hon Patricia Milmo's son, Chuka Umunna, is being heralded as Labour's new saviour. Maybe so, but I do hope he can take the inevitable flack that goes with the job (and that he doesn't invite Russell Brand to headquarters for policy meetings).

The UK, as with all democratic countries, needs a credible multi party system, so it's time to make your minds up Labour. Chose wisely, the clock is ticking.